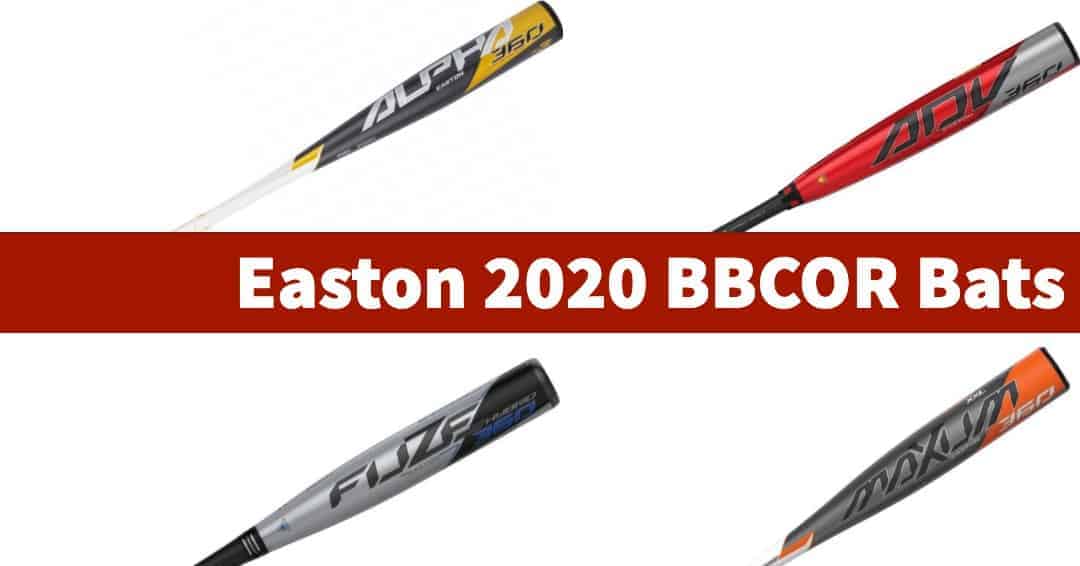 As we’ve already done with some of the other big brands, we wanted to do a breakdown of the new Easton 2020 BBCOR bats.

If you’d like to check out some of the releases by other brands you can see the articles below:

With last years bats experiencing mixed reviews, it will be interesting to see how Easton bounces back in the market place. They have been a big name for many years but bats like the Meta Prime and Demarini’s Voodoo Balanced really seemed to overshadow the 2019 line.

These things happen and every company has had a few bats go bust over the years. Innovation doesn’t always work in your favor. What it’s all about, however, is the response.

Put something in hitters hands that they can’t help but love. That is the ultimate goal.

Let’s see what Easton has put together for the 2020 line of BBCOR bats!

Once again the ADV 360 (minus the “Project 3”) is the signature bat of the 2020 line. It is a two-piece composite bat that Easton describes as “pro balanced.” This basically means this bat will swing heavy with more mass moved towards the barrel.

Also called “end loaded” by some.

The “360” in the name refers to the technology being applied around the entire length and circumference of the barrel. This ensures that no matter which side of the bat you make contact the feel and performance will be consistent.

Easton listened to their customers as one of the main complaints from the 2019 model was the bulky connection piece. This year they have streamlined the iSo conneXion piece and given it a lighter and slimmer look. It is constructed from Nitrocell foam and isolates the barrel from the handle for ultimate comfort through the zone.

The DFS handle is made from 90% carbon. This allows for an ultra stiff handle. A lot of hitters like this feature because a stiff handle ensures that as much energy as possible is being transferred to the baseball on contact.

The ADV 360, and all of the 2020 bats, are equipped with the Power Boost soft knob. This is an interesting piece but not particularly new. The 2019 models had this as well.

The soft knob is designed to diminish some of the impact on a players hand and palm. Particularly for those that like to place their pinky on top of the knob. This could possibly decrease the risk of a hook of hamate fracture which so many players have experienced.

Finally, this bat comes standard with a Lizard Skin grip. I love these grips and they provide a ton of cushion and tack.

The Maxum 360 is the premium 1-piece bat in the 2020 line. The Maxum name comes from “Combat” which is a company that was producing their own line of bats up until 2019.

PSG, the parent company that owns Easton, purchased Combat around 2013. In 2017 the CEO announced that they would be restructuring their baseball and softball divisions.

Essentially what this meant was Easton ended up absorbing the Combat line and releasing some of the technology that consumers were used to under the Easton brand. The most popular of which was the Maxum bat.

Just like the ADV 360, the barrel has 360 technology and is made of seamless carbon. Easton calls this bat “speed balanced” As you may expect it will have a light feel for maximum bat speed and control through the zone.

Easton claims that the XXL barrel is the longest in the game and possesses the largest sweet spot. This is one of the few 1-piece composite bats on the market. So far most of the reviews have been really encouraging.

Once again we see the soft knob and Lizard Skin grips standard on the 2020 Maxum.

There were a lot of complaints about the performance, feel and durability of the 2019 Fuze. Again, Easton seems to be listening to their customers because they’ve made some significant changes.

The Fuze 360 is no longer a 1-piece aluminum bat with a composite end cap. This year they’ve opted for a hybrid design. A big reason may be that there are already some really popular 1-piece bats such as the Louisville Slugger Solo that have a pretty strong hold on this category.

The barrel is constructed of ATAC alloy and reinforced with Carbon Core technology. Just as it’s 2020 counterparts, the Fuze has the 360 technology that Easton has been highlighting.

The Nitrocell foam construction of the conneXion piece connects the alloy barrel to the composite carbon handle. This helps this bat to have a very low MOI and swing very light!

The composite end cap lowers the swing weight as well. This is great for hitters that prefer speed and control.

The Alpha 360 is the 1-piece alloy offering from Easton. It is power balanced and is going to swing heavier than both the Maxum and the Fuze. This means that there is a little more mass in the barrel.

1-piece bats are typically preferred due to their stiffness and power. The one drawback, however, is that they can really struggle with vibrations on mishits.

Don’t despair, Easton has a piece of technology called the VRSCOR to deal with these vibrations. This reinforces the handle and gives a solid feel on contact regardless of where you hit it on the barrel.

Just like the Fuze barrel it is constructed of ATAC alloy reinforced with carbon core. The Speed Cap allows for the power balanced feel as well as a more flexible barrel.

The Alpha 360 is available in lengths of 29” to 34”. This makes it a great option for younger players that are swinging BBCOR bats for the first time.

Just keep in mind that it is going to swing slightly “heavier” than a balanced bat so the length may be important.

Overall I’m really impressed with the bats Easton put together for 2020. They listened to their customers and made changes where it was obviously necessary.

This isn’t always the easiest or most efficient thing to do, but to me it’s a sign of a company that is willing to do what they can to “get it right.”

So far the consensus seems to be that these bats are going to be a really popular option for 2020.