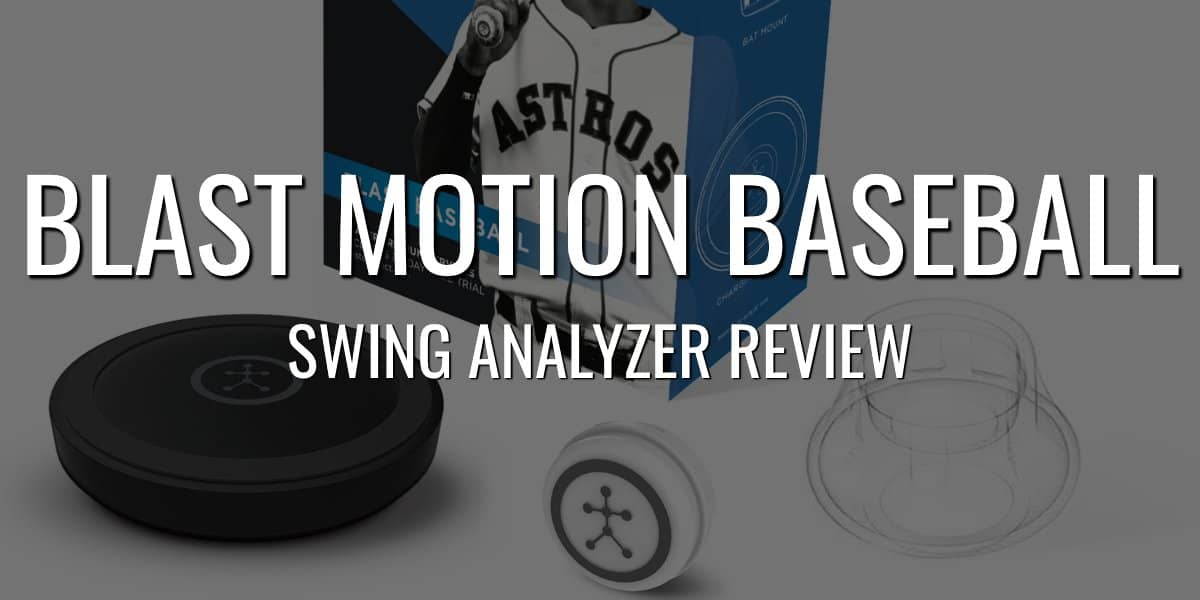 It’s hard to talk about data collection in baseball these days without mentioning Blast Motion baseball.

Whether you consider yourself “new school” or “old school” one thing is clear. The ability to measure is more important than ever.

Once upon a time this type of technology was exclusive to billion dollar professional teams.

In the last 5-10 years, however, companies like Blast Motion have made the ability to analyze and measure your swing something that almost everyone can afford.

In this article we are breaking down the Blast Motion baseball swing analyzer.

We have used similar products in the past such as Zepp and Diamond Kinetics and enjoyed them for the most part, but felt there was a lot of room for improvement.

With Blast becoming increasingly popular we wanted to make a head-to-head comparison.

Next, connect to your phone or tablet via Bluetooth to your sensor.

Once you are connected to the sensor you will need to set up your bats. If you only have one bat you will use with the sensor then you will only need to do this once.

If you have a few different bats then I suggest you go ahead and add them so you can quickly select them before a session.

The Blast sensor auto-calibrates based on the bat profile so make sure you select the correct bat before collecting data on your swings.

Once you’ve setup your bat you are ready to start collecting data on your swings!

On the dashboard select “Session” and you are ready to go.

After each swing you will heard a bell sound and the metrics will show from the previous swing.

You can scroll down to see the addition metrics as well as rearrange the scores you’d like to see at the top of the screen.

So what is the sensor measuring and what does each number mean?

Here is a quick rundown (If you’d like to read more about each measurement I suggest going directly to the Blast site.)

They also measure something they ball the Blast Factor. This assigns each swing a score between 0 and 100. It is the weighted average of the measurements of on plane, peak bat speed, attack angle, body rotation and power.

I like this score because it is a good way to know if “everything worked together” in that swing.

You can easily measure and track your performance in each of these metrics over time which helps you focus on the areas you need to improve the most.

What We Like About The Blast Motion Swing Analyzer

As I mentioned, we’ve used quite a few different swing analyzers over the years. The Blast sensor was the best product straight out of the box.

A few of the things that really stood out…

This was by far the biggest thing that sets Blast apart from the other sensors.

With other I would have to setup and calibrate each player separately. This meant they not only had to choose their bat, but also about 2-3 other steps.

This included things like setting up how they stand in the box, laying the bat parallel to the plate, when the app said swing you’d have to pick up the bat and swing.

Half the time the app wouldn’t pick up the swing and you’d waste time doing the same steps over and over. In the end you wouldn’t know if you’d actually be collecting accurate data.

None of this with Blast Motion!

After you add your bat you can get right to work. Their auto-calibration ensures accuracy with each and every swing with every player.

This easily saved me an hour of work setting up my team.

What I love about the work that Blast is doing is they aren’t just coming up with fancy metrics to sell you a product.

They understand the game is changing but are constantly working with the best players in the world to make sure they offer value to their customers.

The training center is part of their attempt to deliver on that.

Many people will not have a deep understanding of what things like attack angle, peak hand speed or connection at contact actually mean.

Not only do they explain in detail what each of the measurements mean, but they also give to access to drills broken down by each area of focus.

Each drill is designed to develop specific parts of the swing and many of them were designed by some of the most trusted and respected players and coaches in the game.

You can watch a video on each one with a description and demonstration.

The mounting that comes with Blast actually stays on!

A lot of the others were either VERY hard to get on the bat or would slip and fly off after a few swings.

I have never had issues with the sensor coming out of the bat mount, or the mount itself slipping off the bat.

Again this just means you can spend more time doing what you are there to do which is hit!

What We Wish Blast Motion Did Better

The piece that seems to be lacking for a lot of these companies is the team/coaches side of things.

For a single person it’s great. But when trying to collect data for your entire team it gets clunky, costly or both.

In order to track metrics for your entire team you must pay $100 per year for a Blast Connect subscription. This keeps all of your players data in one place.

For each player you add to the account it will cost $7.99 per month.

This may be a deal breaker for some that aren’t willing to pay the additional cost.

For my team we used one sensor for 22 players. This meant that we had to switch between players on the app.

Surprisingly this was a little more difficult that it seems and ended up in swings being uploaded to the wrong player or missing them all together.

When recording video of each player, I thought immediately after the session it would be downloaded into their account.

Somehow the video wouldn’t show up if they logged in later at home to check out their swings that day unless I manually went in to Blast Connect and shared it with them.

Now, there is a chance that I was doing this wrong and there was and easy piece I was missing. I did email support and they helped some, but overall I felt like the platform was a little frustrating.

This didn’t do much to deter me from using Blast because I still feel they are the best product on the market.

Data collection has been a big part of the game of baseball in recent years.

If you go to any minor league game there is a good chance that one or both teams will have Blast Motion baseball sensors on their bat.

Many colleges are tracking every swing their players take.

The Blast Motion baseball sensor is a great product and well worth the price if you can afford it.

Have you had any experience with Blast or any other swing analyzer?

Let us know your thoughts in the comments!