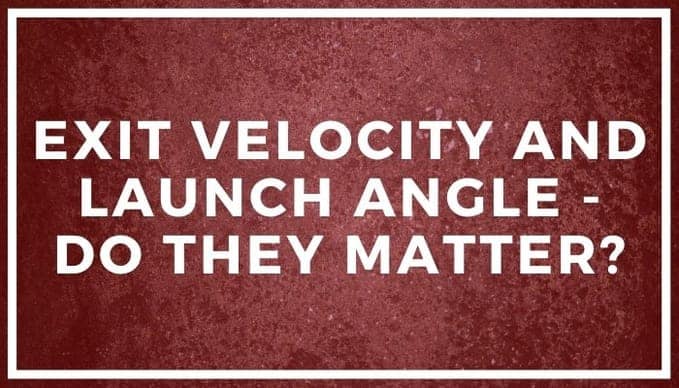 Exit velocity and launch angle have been two of the more popular (and argued) topics in baseball for a few years now.

They’ve been so debated that it’s divided the baseball community like nothing I’ve ever seen before.

Just take a look at the long threads of ego driven attacks that #hittingtwitter has become. I’m actually risking my life by putting that hashtag in this article. Seriously.

Now these aren’t the only topics that have been discussed across the baseball development world but they are two of the more popular and polarizing ones.

For the purpose of simplicity this is not going to be a deep dive into technology, physics or biomechanics.

I simply want to answer this question for you:

Get ready for the biggest cop out answer you’ve ever seen. The answer is:

I know I know. You didn’t open this article just for me to play both sides or tip toe around the subject. But don’t bail on me just yet.

I believe that exit velocity and launch angle are absolutely something you should take the time to understand. Whether you are a player, coach or parent it’s good to be able to have an educated conversation about things that are becoming deeply embedded in player development.

For guys that have a goal of playing college baseball, you will see more data being collected by schools, recruiting services and summer organizations on your swing than ever before.

I’m actually glad that I played long before all of the stuff was available! You can’t hide things like poor bat speed, vulnerabilities in your swing or bad infield range anymore. Especially at the professional level.

When I say it depends what I mean is this:

It depends on your current level of play.

It depends on your understanding of the swing.

It depends on what you actually focus on and value when it comes to these terms.

So let’s take a look at both of these metrics and break down what you should and shouldn’t spend time worrying about.

Just as you may assume, exit velocity measures the speed of the baseball leaving the bat after contact.

Hitting the baseball hard is absolutely a good thing. However, it’s more important that you hit the ball hard consistently.

To make this a little more practical let me give you two examples. We will use two players that I’ve completely made up, Doug and Freddy.

Now, a lot of discussion would stop there and tab Doug as the better and more powerful hitter. This is where people get it wrong when it comes to exit velocity.

After a couple of seasons let’s say we’ve collected a bunch of data on both of these players.

Doug has a hard hit percentage of 21% (we will consider hard hit any exit velocity within 90% of his top EV of 103 mph).

Freddy on the other hand has a hard hit percentage of 48%.

So who is the more successful hitter?

Still tough to tell but if I had to choose based on this metric alone, I would choose Freddy.

And you know what?

I could still be completely wrong.

But when it comes to training I do know this.

When you sacrifice EVERYTHING simply to have a higher “peak exit velocity” there is a chance that you won’t be developing the skills that are actually required to be a successful hitter when it actually matters.

In the game against a live pitcher. Where adjustability is one of the most important aspects of being a great hitter.

There is nothing wrong with testing your peak exit velocity. You should be training to get stronger and hit the ball harder.

But what you should be tracking and paying attention to is your hard hit percentage.

Make sure you can consistently find the barrel. This makes exit velocity even MORE valuable as it goes up!

Now for the ever beloved launch angle. The hitting trolls are out there right now getting Google alerts that someone has posted a new article with the term “launch angle.”

Let’s start with the definition of launch angle:

Launch angle is simply the angle at which the baseball leaves a player’s bat (relative to the ground). If you pop the baseball straight up the launch angle would be 90 degrees.

A line drive that leaves your bat parallel to the ground would have a launch angle of 0 degrees.

Balls hit below parallel would have a negative launch angle.

So when exactly is this measurement worth paying attention to?

Well let me make a couple of statements first.

As stated in point 2, LA is tough to use as a stand alone metric. But when combined with additional metrics such as exit velocity, attack angle or even field of play it can become pretty valuable.

Let me give you an example.

Let’s say you collect a ton of data on a player’s swing and some patterns start to emerge.

Batted balls to the opposite field are mostly hit with a LA of > 20.

So what does this mean?

This player struggles to hit the ball hard to the opposite field so there is a vunerability on pitches away.

I would also say that they have an issue with their swing plane and should analyze their attack angle if possible.

This can easily be done with something like the Blast Motion sensor.

Most likely they are too steep as they enter the hitting zone and are cutting down through contact. This would show up as a negative attack angle.

Now would you say this information could be valuable to a hitter?

I would say absolutely any hitter would like to know what they could do to improve. When used correctly, these measurements can absolutely play a role in doing that.

I think people should at least be able to explain and understand exit velocity and launch angle before disregarding these metrics as harmful.

Putting the two together can give you a lot of insight into a player’s strengths and weaknesses as a hitter. Who wouldn’t want that type of information.

Do you have to sell your soul to the “GURU’s” just because you measure launch angle and exit velocity.

No, just don’t think that this is the end. It’s never the end. This is a small piece.

But be educated and willing to listen and learn.

Don’t be one of those people that look to insult and attack every single person that doesn’t agree with you.

It’s not just bad for the game, it’s just a bad way to be.

If you want some simple ways to improve on both EV and LA effectively you can check out our article on hitting weighted baseballs.

We would love to know your thoughts on these metrics and how you think they have changed baseball.

One thing is for sure. Player development looks a lot different than it ever has before!