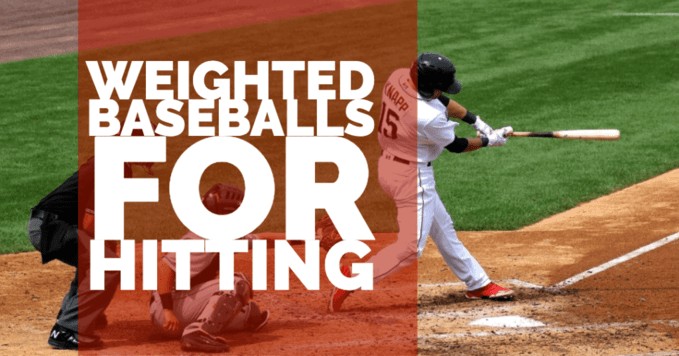 Using weighted baseball for hitting has become a popular choice for training in recent years. Pitchers have been using weighted balls for quite a while but hitters are getting on the bandwagon as well!

Despite the name, most of the products used for hitting aren’t really baseballs. They are a type of plyoball that are flexible and typically filled with varying amounts of sand to make them heavier.

If you’d like to know ones we use and recommend you can check them out here:

So what exactly is the purpose of using weighted balls for hitting?

In this article we will dive into 3 main benefits and reasons you should consider adding this to your training routine.

Metrics are the name of the game these days. Regardless of your option on these metrics, you can’t ignore the impact they are having on the game. Things like launch angle, exit velocity and attack angle have been polarizing the baseball world for the last 3-5 years.

Attack angle is defined as the direction the bat is traveling at impact. In simple terms think “uppercut” vs a “level swing.”

Data suggests that there is a strong correlation between attack angle and exit velocity. This means that if you want to consistently hit the ball hard, your attack angle needs to fall within a range of “optimum” values.

Most young hitters have a negative attack angle. Essentially their bat is traveling in a downward path at the time of impact. It doesn’t take a heavy background in physics to understand that this is not optimal for hitting the ball hard.

Negative attack angles can often be the cause of poor contact and high swing and miss percentages. Steep, choppy swings are rarely consistent or powerful.

So how do weighted balls help?

Because of the construction of the balls, contact that is not through the center will cause the ball to “pancake” or spin excessively. This results in a severe loss of distance.

You can not hit these things very far if you don’t strike them well.

Also, if you have a negative attack angle your hardest hit balls will most likely be straight into the ground. It will be difficult to hit weighted balls on a line through the back of the cage.

By using weighted baseballs for hitting you will start to naturally adjust your attack angle to produce a more desirable ball flight. As these changes become the new “normal” and applied during a live at bat you will notice that you are able to square the ball up more consistently.

By no means is it a guarantee but in most cases the results are overwhelmingly positive. The best thing you could do is give them a try and see if there is a noticeable change.

Even with an optimal attack angle you are not guaranteed to make solid contact every swing. Fractions of an inch can mean the difference between poor contact and solid contact. This is why barrel precision is such an important part of hitting.

Delivering the barrel at the right location and at the right time is an incredibly difficult thing to do. Hitting weighted plyoballs will give you instant feedback on whether you were successful in each of these two fronts.

Between the feel and the flight it will be obvious whether or not you’ve delivered a good swing. Sometimes (especially in drills like soft toss) a real baseball can hide the fact that you’ve made poor contact.

Just take a look at this video….

It goes without saying that hitting a baseball is incredibly complex. Even with perfect “metrics” there are no guarantees. Recognition, adjustability and timing all play an important role in each swing. A great swing at the wrong time will still produce a lot of outs.

By hitting weighted balls in something like a front toss drill you can simply focus on trying to square the ball up. The instant feedback will tell you whether you succeeded without having to analyze film or use something like a Blast Motion swing analyzer.

Let me give you an example:

Let’s say you are tracking hard hit balls for a few rounds of front toss. If you are using normal baseballs your goal should be between 7-8 out of 10 hard hits.

You do this for 5 rounds no problem, and check the box that your swing is prime!

But then you get out the weighted plyos for the next 3 rounds, and can’t seem to hit more than 3 out of 10 solid.

The precision that these balls demand in order to hit them hard has uncovered some potential flaws in your swing! This could go unnoticed if you never hit anything other than a normal baseball.

I’ve seen these things work magic for some hitters. It also gives them a deeper understanding as to why things like swing plane actually matter.

When you put a good swing on a baseball, you want to make sure you get the most bang for your buck don’t you?

We’ve all had that feeling when you thought you got every bit of a pitch and it just seemed to go nowhere. There was just no pop!

Regulation baseballs at only 5 ounces don’t pack enough punch in drills like front toss to always tell if you were really strong at contact. Even on poor swings you can feel like you are crushing it.

With added weight you’ve got to deliver a powerful blow. Otherwise it will feel like you lost the jousting match. Lack of power can be the symptom of a lot of different flaws. The main point here, however, is that you can feel it.

Especially with the heavier balls.

These weighted baseballs train you to deliver a lot of force at the right time, and in the right direction.

Weighted balls make a great addition to any hitting plan. We’ve been using them with our teams and players for years now and believe in their effectiveness.

For younger players I would start very light and be careful not to go too heavy. In this case I would say the feedback is more important than the weight. The strength will come later so for younger guys, it’s better to focus on developing effective swing patterns.

Once again the advantage to these balls is you don’t really have to do anything different. It’s just substituting one ball for the other.

This makes it an easy, low cost and effective training tool for any coach or player.

Give them a shot and let us know what you think!