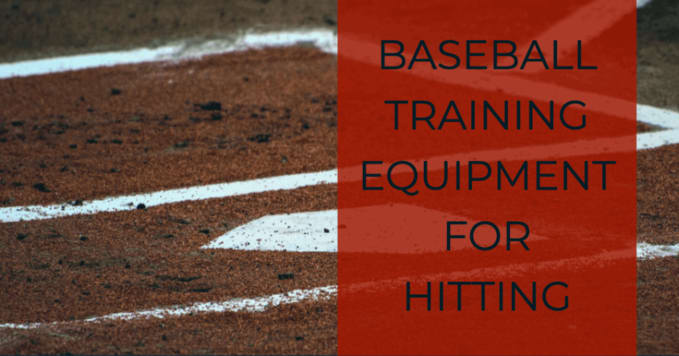 In this article we are going to break down our favorite baseball training equipment for hitting. By no means it is necessary to use every single thing on this list.

In fact you really don’t have to use any of it if you aren’t sold on the effectiveness.

You can be very successful in the cages and on the field with only a few tools and strategies. We will be sharing everything that we have used over the years and you can decide what works for you!

In our article on weighted baseballs for hitting we discuss the advantages to adding these to a hitting program. For younger players it may be smart to stay away from these until they get a lot stronger. Or, you can always go super light if you are dead set on using them!

Just make sure that this is a proper fit for the player!

Plyo hitting balls can have a really positive impact on a players swing plane. They force you to produce an efficient path that directs force through the center of the ball. Without solid contact these balls really don’t go anywhere.

It can get frustrating for the hitter but in the end that is really the point. They require precision and power in order to hit one solid that travels a decent distance.

Check out our favorites here:

Swing analyzers have been revolutionizing the game for the last 5 years or so. Now you are able to measure nearly every aspect of your swing, and the cost is lower than you may think.

Argue if you want about the importance of things like bat speed, attack angle and max hand speed but the fact is they aren’t going anywhere soon. This summer at a Minor League baseball game I noticed the Dayton Dragons had a sensor on every single hitters bat.

The data collected during the game could then be uploaded to the app which housed a custom profile for each player and their individual sensor.

Most Major League teams have adapted similar strategies at all levels. Some teams spending hundreds of thousands of dollars on technology and player development!

For a while there were only a few companies in the swing sensor game. Now there are quite a few offering a low cost way to get some advanced metrics on a players swing.

For us the leader that has emerged is the Blast Motion sensor.

We’ve used a few other products and none really compare to Blast in our opinion. That isn’t to say the others aren’t as good, its just the one we’ve used and had a great experience with. It is easy to setup and works in the background without much disruption to drills or practice.

Their website also has the most extensive library of drills and explanations of each metric that is measured by the sensor.

If nothing else I think it’s worth picking one of these up just to analyze the data. It can give you a whole new perspective on the swing!

This used to be much more difficult because it required expensive cameras and software. Now, however, anyone with an iPhone or iPad can take very high quality video of a swing for later analysis. There are a ton of apps out there as well that allow you to upload the video but I will spare you a list. They all pretty much do the same thing.

What I have used in the past is a software called Kinovea.

This is a free Windows software that allows you to do some really cool stuff with video. Draw lines, measure angles as well as create some advanced kinematics are all possible with this software. For the most part we keep it simple. Video with the iPad and upload to Kinovea for later analysis.

For our teams we keep a folder for each players and categorize by date or game.

It’s easy to use for player meetings when you want to break down a swing or approach. If you have a manager they can clip each at bat and upload it to the folder for later use.

Going back to metrics, bat speed plays an important role in the success of a hitter. Swing speed is directly related to exit velocity. Hitters with high exit velocities traditionally out perform those with much lower exit velocities.

The moral of the story is if you can find a way to increase bat speed you should probably do it.

Studies have shown that a weighted bat training program (among other factors) can be associated with an increase in bat speed over a 12-week period. Keep in mind, however, that you should be an other athlete (high school or college) with some training experience before implementing a weighted bat program.

You have two options when it comes to weighted bats. DIY or purchase a set.

For the DIY route we use coins and tape…. Yes, money!

Simply take some pennies, nickels or quarters and tape them to the barrel to the desired weight! Finish it off with some Gorilla Tape to make it really strong.

We’ve done this with old bats our players had lying around their garage that they weren’t using. It works great!

If you’d like the more “professional” approach I highly recommend you check out the Axe Bat Speed Training bats.

I hesitated to put this on the list, because it can really come across as gimmicky.

Especially when it comes to products that are mass marketed to the baseball community.

Over the years I’ve seen so many horrible hitting products that have sold like crazy simply because most people didn’t understand how bad they were.

So I picked up a Line Drive Pro just to try for myself.

I really liked it.

I felt like it gave me a really good feel of what “barrel direction” means and how it can effect the quality of contact and the resulting ball flight.

I’ll save the bulk of the details for the full review I’m working on but suffice it to say I think it’s worth adding to the tool bag. I’m all about experimentation and this is a very low cost product and something that I enjoyed using.

I’ll be honest, I was not a fan of pitching machines when I was a player. Most coaches were critics as well so it wasn’t hard to avoid the ole’ white tire Jugs machine back in the day.

I didn’t like them because it was hard to get the right timing and the movement was often ridiculous. Because I had 100 built in excuses as to why they were no good, I didn’t spend much time hitting off machines.

Looking back that was probably a mistake.

Pitching machines are the easiest way to ensure that you are seeing competitive pitches all year long. Anyone can hit front toss, but what about 88 with some sink?

Failure is common in the game but in training it’s often avoided. There’s something to be said about taking rounds with a high level of success, but sometimes you’ve got to dig in and get uncomfortable. The batters box demands it. We feel it’s beneficial to match a good portion of training to what you actually experience in a game like scenario.

No they are not perfect. It would be easy to come up with counter arguments as to why they ruin hitters and should be avoided at all costs.

This article could go on for quite a while. Tees, PVC pipe, medicine balls….

There are a lot of other tools and training methods you can use for hitting. The most important thing is finding out what works for you and/or your hitters.

Hitting is not a one size fits all endeavor so you should always be up to exploring new ideas and methods.

The best in the world are continually trying to get better, why not you?

What have we missed that you feel is critical to a hitters development?